View source
This is a community Wiki, hence we have no power over bans or appeals. If you believe you were falsely banned, you may read about appealing here, and then appeal here. 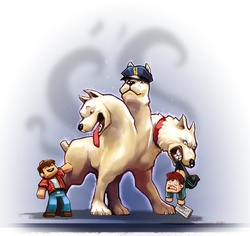 The Watchdog Cheat Detection™ is a private cheat detection used by the Hypixel Server, invented by CryptKeeper.

Adds a player to the reports queue (Reports a player).

Every time you report someone, you should always report them at the official website!

What is /watchdogreport and how does it work?

/wdr stands for “Watchdog report” and was designed to make reporting players who are using blacklisted modifications, or modules, faster and easier for our community. Here's how it works, when you type /wdr sends a flag to Watchdog saying something like “Hey Watchdog, this player might be employing KillAura (or whatever hacks the player fills for the arguments)” and Watchdog will respond, saying “I will check it out as soon as possible,” then it compares the data of known cheats to the reported player's data to determine if action needs to be taken. In addition, running /wdr will notify available moderators with a message saying “Hey this player might be hacking,” and they may take action. /wdr also helps train Watchdog making it better at catching cheaters.

Simply put /wdr is not a /ban tool and as said before it only tells Watchdog “Hey watch this player.” Watchdog then takes this into account with as it observes the players using YOUR input to better make a decision, sometimes it still needs to gather more data to be 100% sure.

Why was I banned by Watchdog?

If you were banned by Watchdog your provided ban reason will include: [WATCHDOG CHEAT DETECTION]

You were monitored, caught and confirmed to be in one or more of the following categories:

What can I do to stop this from happening?

Watchdog is not a ban system due to the employment of an attempt to make the player unclear of what module they were banned for.

Otherwise the hacked client creators may know exactly what hack is getting players banned and will fix it immediately.

Watchdog is slowly advancing because they want time to try to overwhelm the hacked client creators, so they can patch a trick of bypasses rather than a flood.

After someone makes a /watchdogreport , it will tell watchdog "Hey Watchdog, this guy might be using KillAura!" The player is then sent to a queue where certain players that have been released red flags upon are present. On a consistent interval of 30 minutes, Watchdog entities will be released upon all the players present in the queue concurrently, and circle the player under strictly circumscribed movements.

NOTE: If one hits the Watchdog entity 10-15 times continuously, it will assume they are using the KillAura, AimAssist, or AutoClicker modules, and will immediately ban the player. This only happens very rarely. To refrain this unfortunate event from ever taking place, please follow the recommendation below.

Recommendation: Safe users that fear getting falsely-banned stay calm and try, as hard as possible, not to hit the Watchdog entity, or avoid vector contact with it. If you click at a very high pace, please feel free to employ this safety technique.

WARNING: NO SERVER MODIFICATIONS ARE ALLOWED. THIS WILL RESULT IN AN IMMEDIATE KICK OR BAN EXECUTED AUTOMATICALLY SERVER-SIDE, AS A FLAG OF A THREAT CLIENT.

* Any modifications that are NOT present in this list are considered either bannable, or "use at your own risk" modifications.

With the new appeal system, you can only appeal one time per punishment. It is easier for the players to make an appeal without having to find the format, not use it, etc. Especially with the Appeals Team getting spammed.

Note: It is best to respond to all of the questions.

If you believe you were falsely banned, you can read about appealing here, and then appeal here.

Community content is available under CC-BY-SA unless otherwise noted.
Advertisement